A project successfully completed:
« Elaboration of natural risk maps and detailed risk plans for landslides for a number of administrative-territorial units of Prahova County».
And a new beginning: « Making the first geotechnical risk map in Romania ». 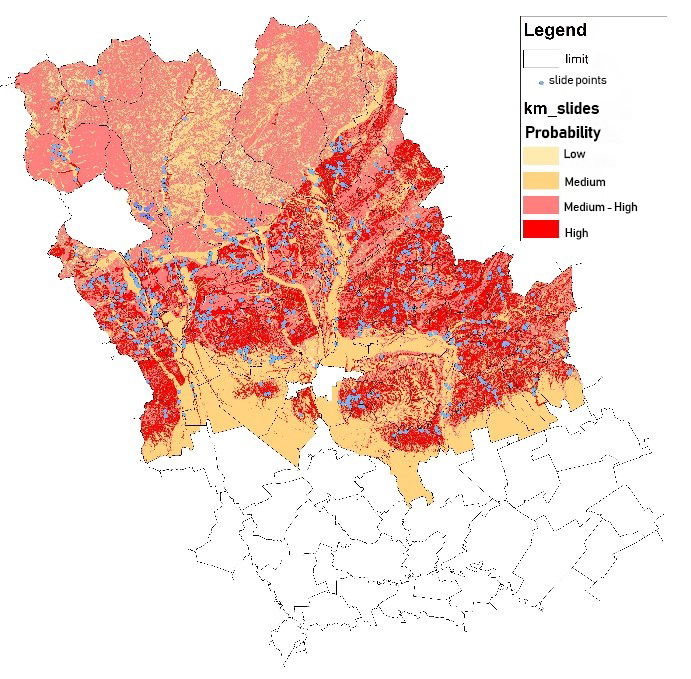 At the beginning of June 2019, the last stage regarding the realization of the natural risk maps and the detailed risk plans for landslides was notified by the Ministry of Regional Development and Public Administration for a number of 22 territorial administrative units belonging to the Prahova County. Thus ended a process started in 2011, where, during 5 stages, a team led by the project manager Alina Eftimie, made the plans for this natural risk, for 71 territorial and administrative division (t.a.d.) located in the north and center of Prahova county.
Although for the 71 t.a.d-s the were individual projects, they were realized respecting the methodology provided in “HG 447/2003 for approving the methodological norms regarding the elaboration and the content of the natural risk maps for landslides and floods”, in order to could be integrated into the structure of the study of the natural risk areas identification for landslides at county level.
All the projects were realized in an integrated GIS (Geographic Information System) system, thus making available to the Prahova County Council not only the hazard and risk maps for landslides (figure 1), the thematic maps, which according to the HG 447/2003, which were the basis of their realization (lithological factor map, geomorphological map – figure 2, climatic and hydrogeological map, forest map, etc.), but also a large database containing:
• Detailed records for each of the 687 landslides distributed over the 71 t.a.d-s lands, containing: the location of the slip (in geographical coordinates and STEREO 70), the limits of the slip, the description of the slide with representative photos, remediation solutions, etc.)
• Infrastructure network (road and rail transport, sewage, telephony, cable, etc.), georeferenced and digitized for all the analyzed t.a.d-s;
• The hydrographic network (all cadastral and non-cadastral rivers, torrential valleys, artificial and natural lakes) georeferenced and digitized.
Starting from this experience, in which SC GEOSTUD SRL carried out the geotechnical and geophysical research, and in front of a new project that aims to analyze the geotechnical risk factors on an area, on which it is desired to realize a new railway route, it was conceived a new map model, this time based on the criteria for defining the geotechnical risk (according to NP 074/2014. Normative regarding the geotechnical documentation for constructions) -table 1.

For the realization of this new map model, the principles of HG 447 have been preserved by defining layers (thematic maps) based on which, through a calculation algorithm, to reach the final product: the geotechnical risk map. The 5 layers used were represented by the factors that define the geotechnical risk, and the score given to each factor was the one specified in NP 074/2014.
Previously, in the area of interest, a geological-technical mapping was performed, an action that represents a sine-qua-non condition, for the realization of the geotechnical risk map.
Also, before making the geotechnical risk map, we made, on the same area, the hazard map for landslides, first to calibrate the two models, but also because they include common elements (for example the digital model of the land).
Thus, for the definition of the terrain conditions, the available geological maps were used, supplemented with the information obtained from the geological-technical mapping.
For zoning “landslides with slip potential”, classified in NP 074 under “terrain conditions” as “difficult lands”, we used the slopes map obtained on the basis of the digital terrain model. A limitation of the normative NP074 / 2014, which lacks a geomorphological and hydrological criterion (surface terrain conditions) in defining the “geotechnical risk”, however, forced us to frame the terrain slope the “terrain conditions” layer thus sharing the points. 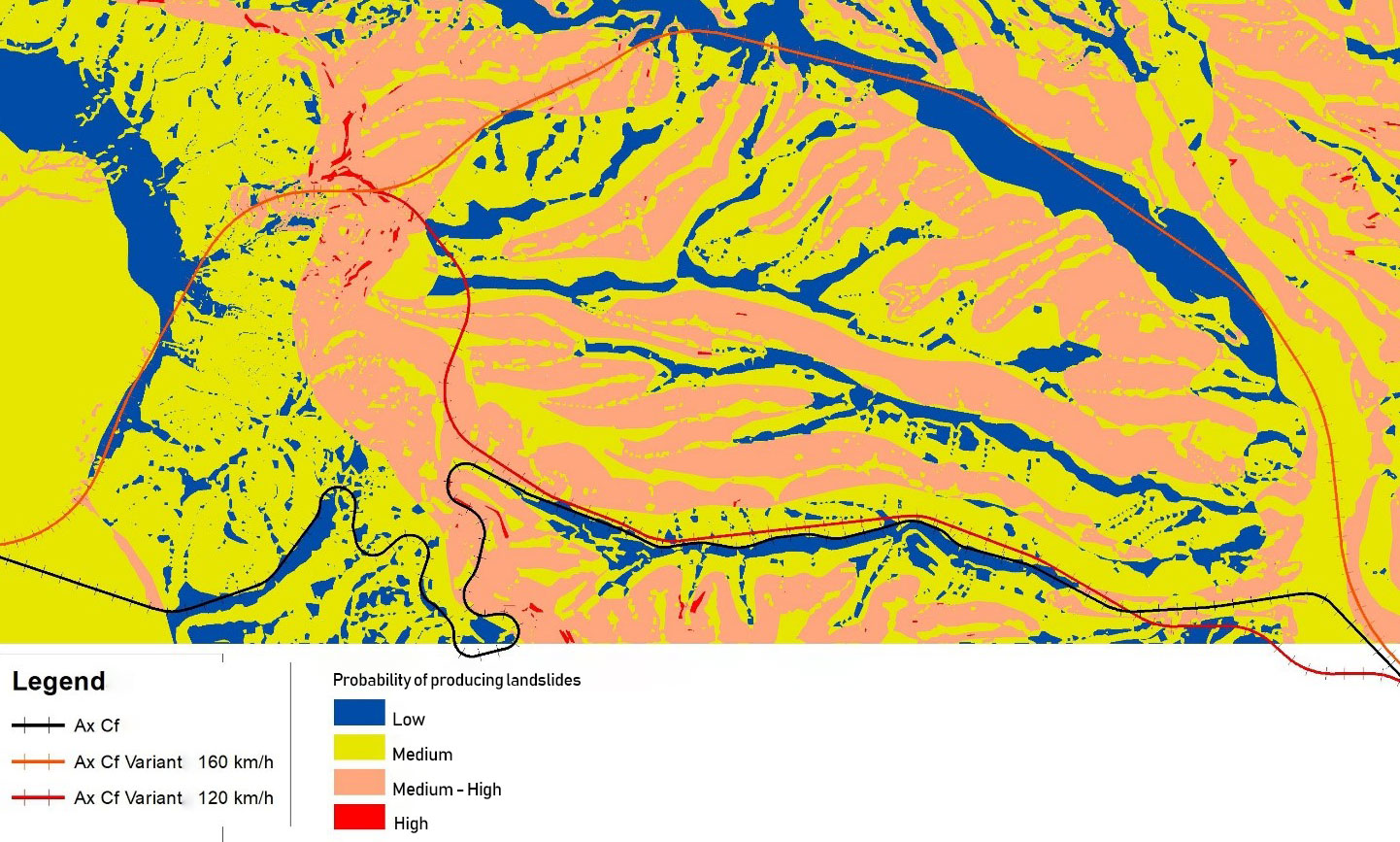 Figure 2. The hazard map for landslides of the area of interest 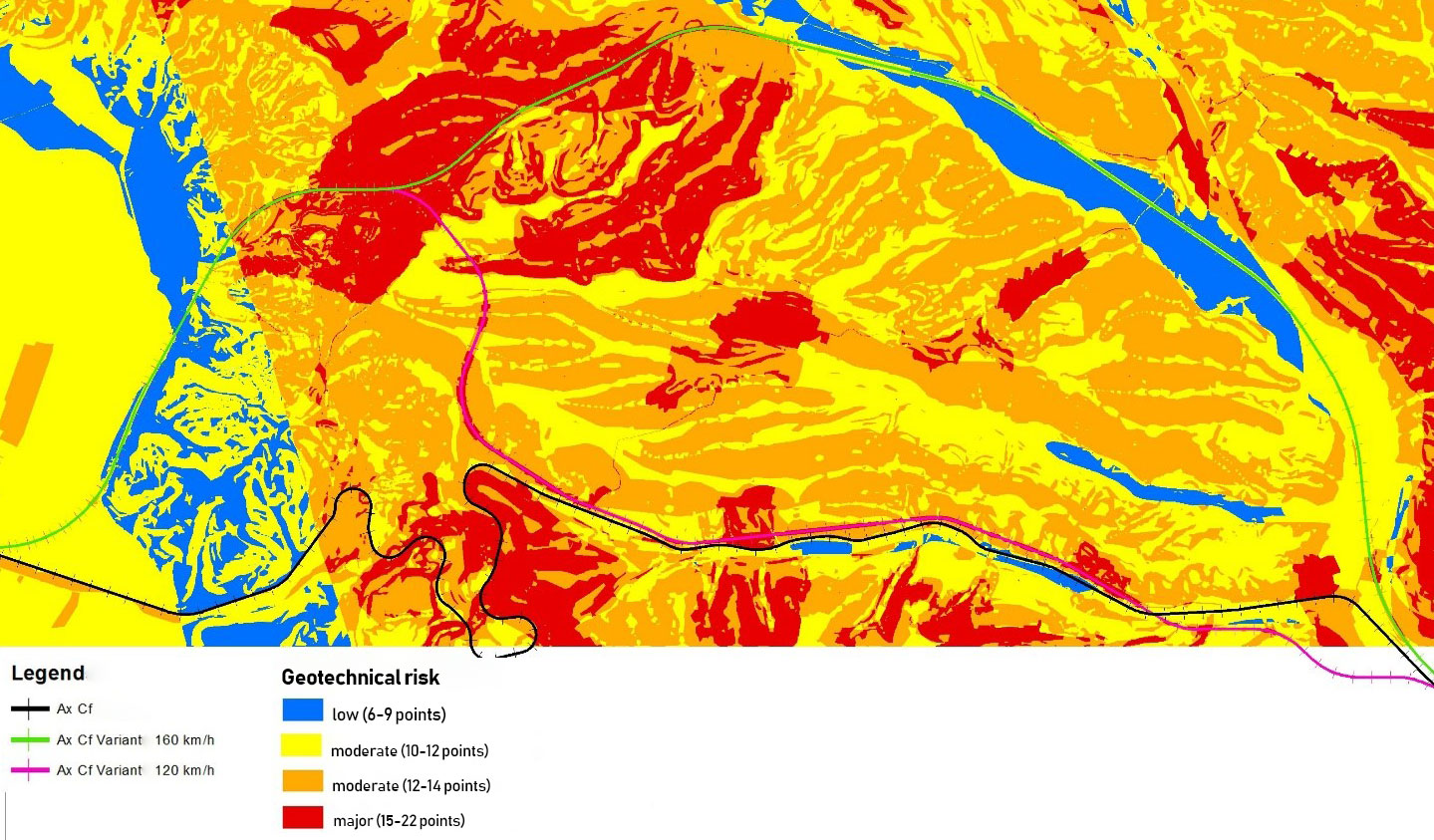 After the completion of the two maps and from their analysis we can conclude: