The willingness of the builders to check the quality of the execution of the earthworks by methods that do not disrupt the activity on the site and which can be done in the simplest way possible can be understood. For this reason, through the Tender Book for Earthworks, designers, often to meet the Executor, are looking for alternative methods for checking the compaction mode or obtaining the bearing capacity. But can these methods always replace the classic static plate tests needed to determine the bearing capacity or density tests and Proctor tests needed to determine the degree of compaction?
In this article we will analyze whether tests with the light dynamic deflectometer LFWD (dynamic plate) can be a solution, as an alternative method, either for replacing bearing capacity or compaction tests.
The LFWD dynamic light deflectometer arrived in Romania in the early 2000s with the Swietelsky-Wiebe association of builders, the one who made the rehabilitation of the Bucharest – Campina railway line. It was a ZFG product made by Zorn-Germany, but in the meantime there was also a light dynamic deflectometer produced by Carl-Bro, Holland, namely the Prima 100 dynamic plate.
By the test method with the light dynamic deflectometer, the “Evd” dynamic deflection module is determined, which is a parameter for the deformability of the ground tested under the action of an impact, of duration “t” and whose value is calculated according to the amplitude “s” of settling the land under a circular plate, according to the following formula:

Figure 1 shows the constructive diagram of the light dynamic deflectometer, and in figure 2, the scheme of the operating principle: 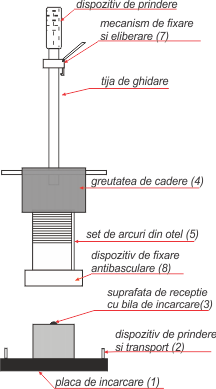 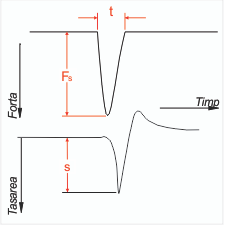 The test has the advantage that it allows measurements in very tight spaces, does not require a weight of ballast and has a short execution time, which allows a quick estimation of the uniformity of the test area, through an approach of statistical methods. For these reasons, based on results obtained in experimental polygons, certain correlations between the values of Evd and the bearing capacity (the linear deformation module Ev2 – obtained with the static plate, according to the German norm DIN 18134) or between the values of Evd and the degree values compaction (D) were made.
The presentation of these correlations, in the specialized literature, we consider, however, that it is done, even by the authors, with certain precautions. For example:

1. In the Wirtgen Road Construction Manual the tests with LFWD are included in the test group to determine the load capacity and the degree of compaction, but in the WRC Manual no correlation between the values of Evd and D is presented, and the correlation between the values of Evd and EV2 is accepted with certain limits
“The EV2 / Evd relationship is not constant, depending on the type of material and the degree of compaction. However, it can be within the following limits:
• for sand and gravel sand: EV2 = 2,0 -2,3 Evd
• for clays and plastically stiff dust – hard: EV2 = 1,3 – 1,6 Evd
Dynamic plate tests provide reliable results if calibration with static or density tests has been performed previously.”

2. In the work “Der Eisenbahnunterbau” (Railway Infrastructure) (item 1 of the Bibliography) the authors comment on the relations between the values of Evd and the values of D or EV2:
– ” With the increase of the value of Ev2, respectively with the increase of the degree of compaction, the dynamic deformation module Evd also increases “;
– ” End dynamic deformation module is smaller numerically than static En2 …”;
– “the En2 / End ratio is not constant, but depends on the type of soil and the degree of compaction being within the following limits: En2 = (1.5… ..3.5) x End,”….,
– ” dynamic testing gives reliable results if calibration with static test or density checking has been performed before”
And the authors’ conclusions are:
“Regarding the “dynamic control of the carrying capacity with the light plate”can be concluded as follows: This control mode is realized by a very rational and efficient method.
• By performing many more control points, at shorter intervals, statistical evaluations can be performed.
• The control method is particularly suitable for its own supervision, which must accompany the construction work.
• The method will gain its full importance only when it no longer has to go the bypass route, but the minimum values will be recognized on its own. However, further research needs to be done.”

3. In the technical documentation of the two devices (ZFG and Prima 100) only the manufacturer of the ZFG model (Zorn) presents link relationships between the values of Evd and the values of Ev2:

For this reason, but also because the parallel tests we have done with the two devices have given totally different values, we note that the above relationships can only be used for the Zorn device.
And in the ZTVA-StB / 1997 technical documentation, which technically regulates the Zorn type LFWD testing, the correlation between the values of Evd and D is presented only in the case of excavations for utility trenching (cables and pipes), so of works of low importance.

4. From one’s own experience:
• On the Bucharest – Câmpina railway embankment (90 km), rehabilitated between June 2001 – July 2003 by the Swietelsky – Wiebe German-Austrian association, the Institute for Railways (ISPCF) carried out the tests of carrying capacity (with static board) according to DIN 18134), checking the degree of compaction (volume replacements and Proctor tests) and tests with the light dynamic deflectometer (LFWD).
The material tested was a mixture of crushed stone ballast (PSS) with an average thickness of 50 cm. More than 430 determinations of the compaction characteristics, over 350 values of the linear deformation module EV1 and EV2 respectively and over 10,500 values of the dynamic deformation module resulted.
The results of these tests and the correlations between the values obtained were presented at the National Conference of Geotechnics and Foundations in 2004 in the work “Reabilitarea liniei c.f. BUCUREŞTI – CÂMPINA componentă a Coridorului IV Pan – European. Studii geotehnice pentru asigurarea capacităţii portante a fundaţiei căii – Eng. Oltean, Eng. Constantin Cârstea, Eng. Leonin Bogățeanu, Eng. Ştefan Bucioaca, Eng. Vasile Șerban”.

Although the volume of data obtained was particularly large, in the paper quantitative (graphical) correlations could only be made between the load parameters (Ev1, Ev2) and the compaction parameters (D), their relation with the Evd values remaining in the qualitative field.

• Within the project of rehabilitation of the line Brașov – Simeria, Variant Podu Mureș – Coșlariu railway, S.C. Geostud S.R.L. performed between 2016 and 2018 geotechnical monitoring of the execution. For this purpose, within this program, in the experimental polygon Coșlariu (km. 396 + 800 – km. 396 + 850), at the top of the first layer of the transfer layer component (h = 0.50 m) the following tests were performed:
– 6 tests with the static plate for determining the Ev1 și Ev2 linear deformation modules;
-5 volume replacements for in situ determination of density in dry state (d). In order to determine the degree of compaction, the obtained values were compared with the Proctor value of the material put into operation (dmax), determined in the laboratory;
– 30 tests with the light dynamic deflectometer to determine the Evd dynamic deflection module;
The results of the tests performed with the light dynamic deflectometer (photo 3) were used to verify the uniformity of the execution, the evaluation being done both qualitatively (figure 3) and quantitatively through the statistical analysis to determine the coefficient of variation Cv. 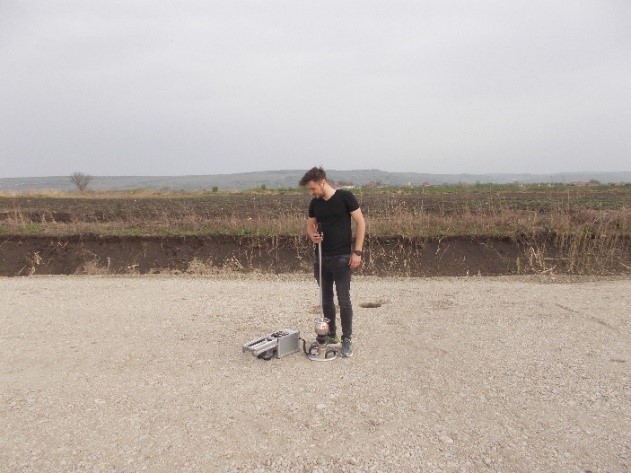 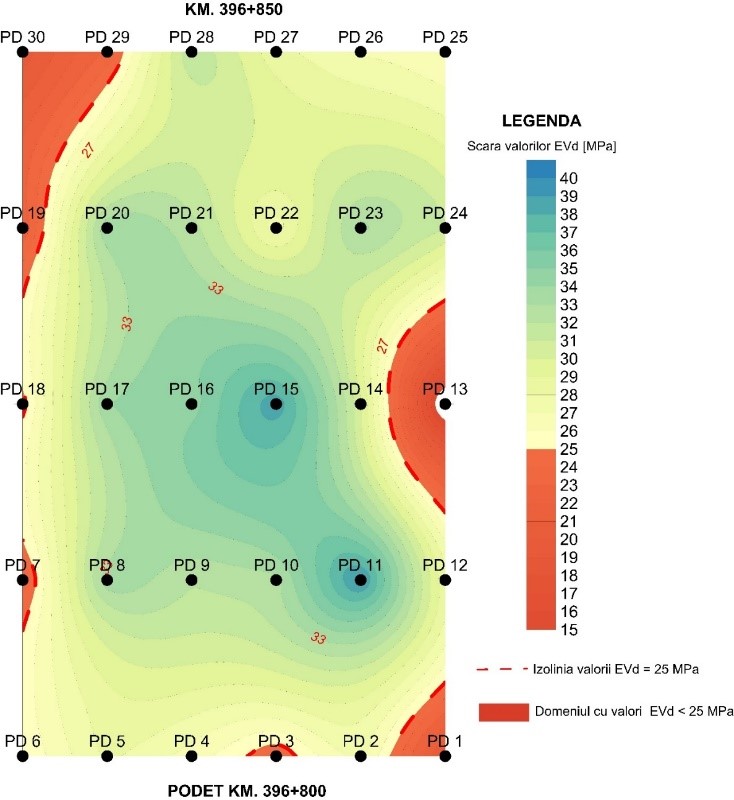 Conclusions: We believe that the use of light dynamic deflectometers on the site can be useful under certain conditions, namely:
• for the thickening of the verification points of the bearing and compaction characteristics provided in the Tender Book for Earthworks so that, through a statistical analysis of the Evd values, a more detailed image of the uniformity of the tested earthwork is obtained;
• for an internal verification specific to the builder, so that he can make timely decisions, if any, of the restoration of the earthwork.
• for the partial replacement of some of the verification points of the bearing capacity or the degree of compaction performed by conventional methods. However, this can be done only for smaller works and only under the conditions of a good knowledge of the correlations between the Evd values and the parameters of bearing capacity or compaction. This knowledge can be obtained in experimental polygons, on a representative number of parallel determinations, the results of which, conclusive, are presented in the form of technical documentation. Even in this context, the replacement of a part of the volume of classical determinations with light dynamic deflectometer (LFWD) tests should be done with caution and only on the basis of a written program, approved by the Beneficiary.